Good Evening, In the past few weeks we have talked about six separate issues that have been influencing the market. I won’t rehash all six right now but if you want to review then you can just pull up the last two blogs and that should get you up to date. As for today there are two of those issues that are shaping the market. Those are the rise in government bond yields and the failure of congress to agree on a budget and more importantly a debt ceiling. Of course it was the same old same old with the bond yields. Specifically the yield on the closely watched ten year Treasury Bond. It went up as high as 1.56% and highly rate sensitive tech stocks sold off bringing the major indices lower. The second issue is the US budget. While congress did pass a continuing resolution which keeps the government open through sometime in December it failed to agree on a budget or debt ceiling. All the temporary spending bill did was keep the government open at current budget levels. Other than that it accomplished absolutely nothing. The battle as usual is over the size of the budget in relation to how much it will add to an already huge amount of government debt which brings me to the topic that I think is the biggest one. In an  earlier blog I called it the “elephant in the room”. It is the debt ceiling. It caps the amount of money that our government can borrow. Treasury Secretary and former Fed Chairwomen Janet Yellen is on record as saying that if the current debt ceiling is not raised or eliminated altogether that the US Government will begin defaulting on it’s debt on October 18th. She also said that this could push the US economy into recession.

According to CNBC  Treasury Secretary Janet Yellen on Tuesday told House Speaker Nancy Pelosi that Congress has just under three weeks to address the looming debt ceiling and avoid near-certain economic calamity. “We now estimate that Treasury is likely to exhaust its extraordinary measures if Congress has not acted to raise or suspend the debt limit by October 18,” she wrote in a letter. “At that point, we expect Treasury would be left with very limited resources that would be depleted quickly.”  Yellen, who will testify before the Senate later Tuesday morning, warned in a separate statement to lawmakers that failure to suspend or raise the debt limit would lead to the first-ever U.S. default and have severe consequences for the US economy.

I totally agree! I remember the last time this default issue came up and a couple of the credit rating agencies either downgraded or threatened to downgrade US government bonds. The market sold off and sold off hard! Luckily for us they raised the debt ceiling and that crisis was averted. However, one has to wonder if congress can ever agree on a debt ceiling this time around given the proposed budget by progressives within the majority Democratic party. My understanding is that the budget proposal backed by Senator Bernie Sanders is 9.7 trillion dollars. The current budget proposal backed by the Biden Administration is somewhere in the neighborhood of 3.4 Trillion. Both proposals would require congress to increase or eliminate the current debt ceiling. On the other side of the isle you have some Republicans who are against raising the debt ceiling at all and many more that want the current Biden budget request to be decreased. Does it sound to you like they are close to an agreement? I tend to think of these things on terms of my budget…..In much simpler terms what would happen if any of us spent more than our current income and credit limits would allow??? Would we have the option of increasing our debt limit infinitely? Absolutely not!!! Folks something has to give here. We cannot keep increasing the budget. Perhaps if we can agree on what we need to spend our money on we could actually balance the budget for once. They did it back in the 90’s so why can’t they do it now! I can hear it now ‘Scott, that can’t be done!’ Oh it can’t?? There are several states that do it now!! Tennessee is a good example. They have no state taxes and instead derive their income from sales taxes which in most municipalities are in the neighborhood of 9%. They have now balanced their budget 4 years in a row!  Think the cost of living is high? Think again. It is actually very good, ranking them as one of the top 10 retirement states in the country. There are others, I just used that one as I am familiar with it. Enough ranting for now. You get the picture. Either they solve these problems or the economy and the market will pay the price. In other words we will pay the price!!! Folks, it doesn’t take a Harvard educated economist to figure this out. So what is my recommendation? Follow our charts and keep praying to our Father in heaven who is the only one who can straighten this mess out. Congress either can’t or doesn’t want to and I honestly don’t know which one.

The days trading left us with the following results: Our TSP allotment posted a gain of 1.05%. For comparison, the Dow added +0.92%, the Nasdaq +1.25% and the S&P 500 +1.05%. It was a nice rebound from yesterdays selling but we need much more of this to get things where we need them to be. Either way I thank God for todays rally. Give Him all the Praise!!

The days action left us with the following signals: C-Hold, S-Hold, I-Sell, F-Sell, We are currently invested at 100/C. Our allocation is now +10.89% on the year not including the days returns. Here are the latest posted returns:

Now lets take a look at the charts. All signals are annotated with green circles. If you click on the charts they will become larger. If you want to learn more about technical analysis check out the website StockCharts.com.
C Fund: 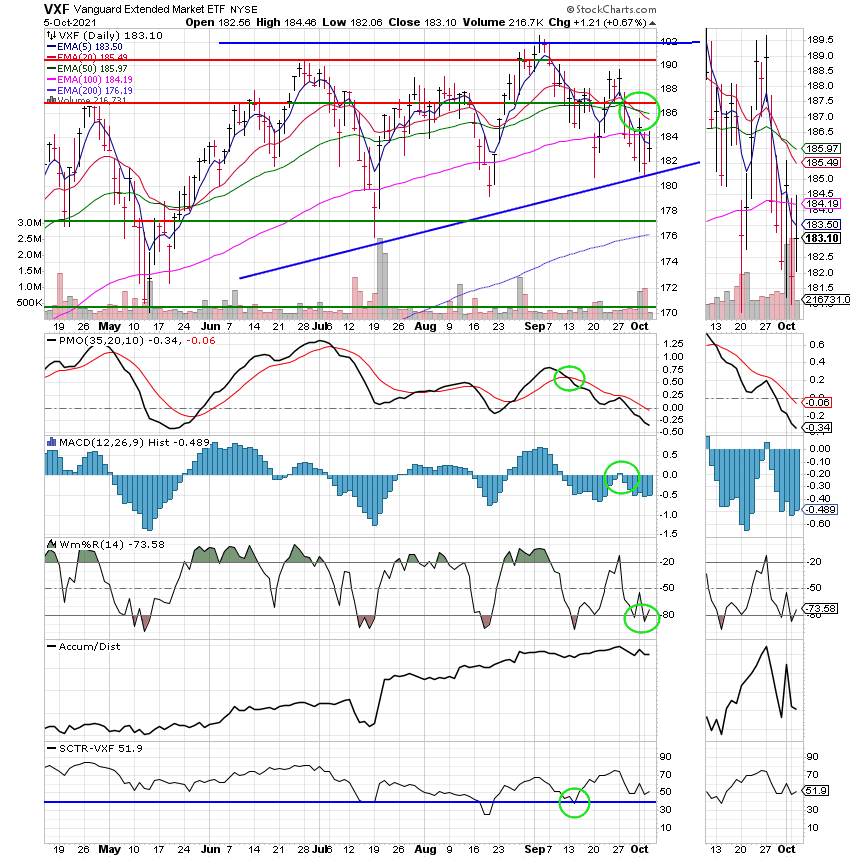 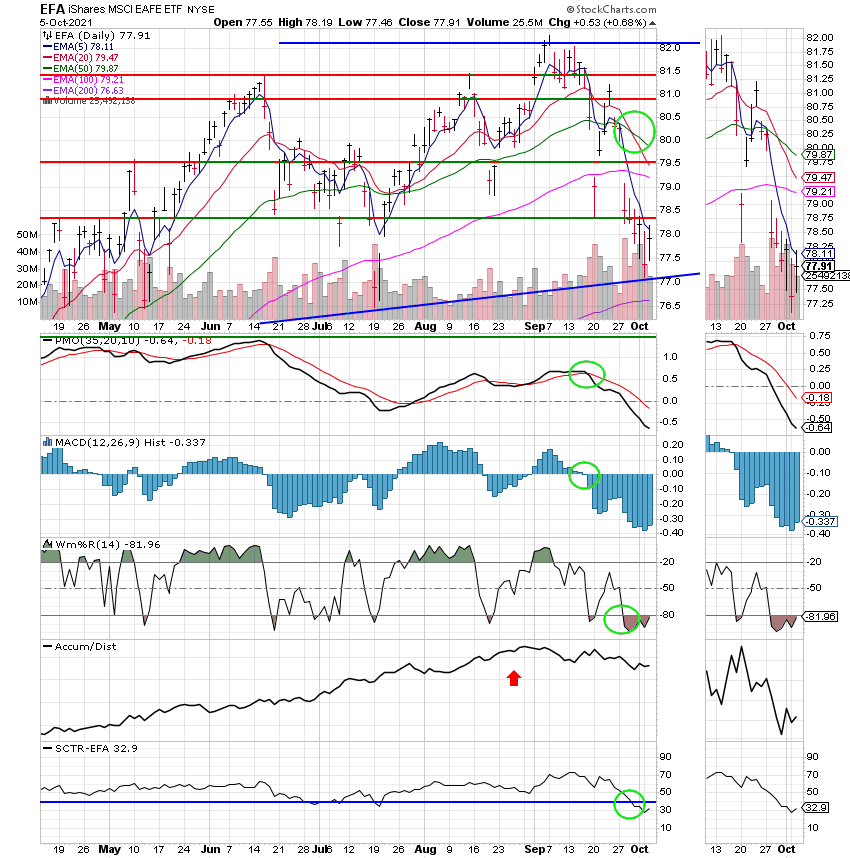 “The sell-off was in part driven by a rise in 10-year government bond yields…, higher inflation, and weaker growth,” wrote Mark Haefele, chief investment officer of global wealth management at UBS. “Energy shortages and a fiscal impasse in the U.S. Congress also undermined sentiment. But we see such worries as overstated, or likely to fade soon, and we expect the equity rally to get back on track.”  Keep Praying! That’s all for tonight. Have a nice evening and may God continue to bless your trades!
God bless, Scott

***Just a reminder that you can review the performance of our allocation at the Web Site TSPTALK.com in the autotracker section under the screen name KyFan1.
I produce and publish this blog as both a ministry and for the benefit of any Federal Government Employee. This is done to offer you some guidance as to how to approach your retirement more financially successful. When it is time for you to retire, I recommend you utilize the services of a Professional Money Manager, who works with a reputable investment firm. He understands the guidance you have already received and he can manage your savings assets utilizing a more advanced investment program into the future.
If you would like to receive more information about this introduction, please feel free to contact me at  KyFan1@aol.com.

“The sell-off was in part driven by a rise in 10-year government bond yields…, higher inflation, and weaker growth,” wrote Mark Haefele, chief investment officer of global wealth management at UBS. “Energy shortages and a fiscal impasse in the U.S. Congress also undermined sentiment. But we see such worries as overstated, or likely to fade soon, and we expect the equity rally to get back on track.”